Learning to speak Shakespeare like the actors do | BBC News 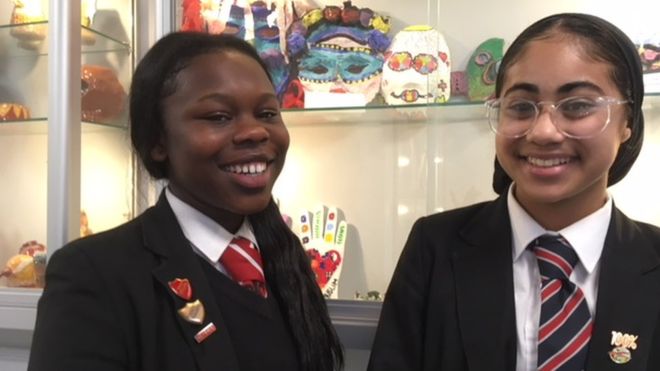 Between them Stacey, 14, and Maleeha, 13, speak six languages – now they both speak Shakespeare as well.

That’s just as well, as the work of the 16th Century dramatist and poet forms as much as a quarter of the marks for some English GCSEs.

To do well in this key exam, in which the results are crucial to schools, pupils need to become comfortable with the complex poetry of Elizabethan England. Beautiful though it may be, the language does not sit easily with the staccato, text-speak and Instagram posts of today’s modern teenager.

And one might assume it would be harder for pupils who speak languages other than English at home.

These pupils from Barking – a culturally diverse part of east London – were not always so fluent with the Bard.”When I first saw it.. Shakespeare I mean… I didn’t really want to read it,” says Stacey.

But the Year 9 pupil describes how she was given a kind of “code” to the language, along with her classmates at Eastbury Community School.

As one of the Royal Shakespeare Company’s associate schools, pupils were helped by a specialist from the theatre company’s education programme.

She worked with the class, helping pupils to unlock the language using tried and tested techniques.

Read the full article here: Learning to speak Shakespeare like the actors do | BBC News

This entry was posted on May 6, 2018 by toomanysusans in Features and tagged BBC, english, GCSEs, language learning, Royal Shakespeare Company (RSC), the arts, theatre, William Shakespeare.